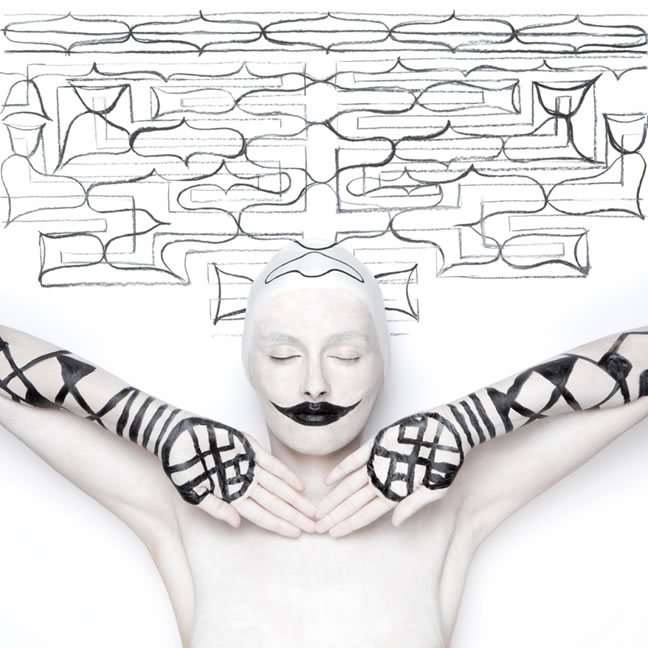 In winter it is bitterly cold on Hokkaido.

A young man stands in the snow in his felt boots beside a kotan (the traditional dwelling), wrapped in a deerskin jacket. With his flowing hair, bushy eyebrows and fully beard he crosses his strong arms and contemplates the world. His name is Ainu, a word that means Human in his own language.

On the other side of the island a lovely woman is enjoying her independency and laughs at the sun, still being aware that she has to remain extremely beautiful if she decides to marry Ainu one day. She feels totally safe and relaxed as her grandma prepared everything in advance. The big secret of happiness was just a simple tattoo that was brought to earth by the ancestral mother and so she decided to have it done. This tattoo was supposed to repel evil spirits from entering her body causing sickness or misfortune. Even more, it was powerful enough to assure her life after death together with her beloved ones.

So her aunt started working on it since the young woman was only six years old. She used soot from burnt birch bark and gradually built it up through the years till the incredible drawing on her face became a permanent smile, or a moustache, making her look so amazing that when the tattoo was ready, Ainu suddenly noticed her.

The man decided to reside with her family and helped her parents with their daily activities. Ainu knew very well that he has to provide a “bride service” if he wants to be considered a real man. Labour is how he intends to pay for the woman as he has no money like the Japanese.

One day he will go to her house and will eat half a full bowl of rice handed to him by her and will return the rest to the woman. If she’s going to eat the other half she’ll accept his proposal and so they will get married. No extra words will be necessary.  But if she won’t and put the bowl beside her, he will have to move on and hope to fall in love with someone else.

If lucky the wedding will commence between a new moon and the full moon. It should not happen when people are busy, especially with fishing. It should also be just a simple arrangement involving only the members of their immediate families.

Soon after marriage, Ainu will make her wife a knife sheath, a spoon, a shuttle and a weaving loom. In return she will offer him a girdle, a pair of leggings, a necklace and a headdress. These will be their vows and they will be held in high regard for the rest of their lives.

Since the end of the 19th century the Japanization of the Ainu has taken ever more repressive forms. By as early as the mid-1960s, the Ainu has already almost died out. Outside the walls of their museum whether on Hokkaido, or even more so, in Tokyo many Ainu keep quiet about their origins and traditions for fear of discrimination. Anyone who confidently confesses his identity as an Ainu still encounters everyday intolerance, such as when the bank declines to give credit, or a snooty hotel refuses admission at the entrance or claims to be fully booked up. Prejudice cares little about the actual legal situation. According to this, however, the Ainu have the status of a national minority, which therefore should be protected. Nevertheless, it is no wonder that the last original inhabitants are making yet another attempt to combat the pressure on them to integrate with the average Japanese.